Know by many names Varanasi is said to be the only city on earth to be continuously inhabited for 16'000 years. Benaras (or Benares) is the ‘Ras’ (taste or essence) of 'Bena' (all things mixed together). Kasi (The City of Light), Avimukta (Never Abandoned), or what is now called Varanasi (between the Varuna and the Assi Rivers). Varanasi is a holy town for Hindus and some other religions. Those, who can afford a sum of around 3 - 5'000 Rp for a cremation at the two burning grounds at the Ganga river will cut short the cycle of rebirth and straight go to heaven. The prospects of the new life are uncertain - it might be a better one, or not at all. It depends on your karma and your conduct. The open handling of dead bodies next to everyday life errands is for westerners quite irritating. Many sensationalist articles take up the death rites in Varanasi. Quite often the story is much exagerated for impact or judgemental based on a different set of values. If you interested in a profound introduction I can recommend the chapter on Hinduism written by Mark Elmore in the book Death And Religion in a Changing World edited by Kathleen Garces-Foley. The fact that the scenery of ordinary daily life is so breathtaking and seemingly exotic creates a sensation which makes you want to explore deeper and understand the concept behind it all.
Read More 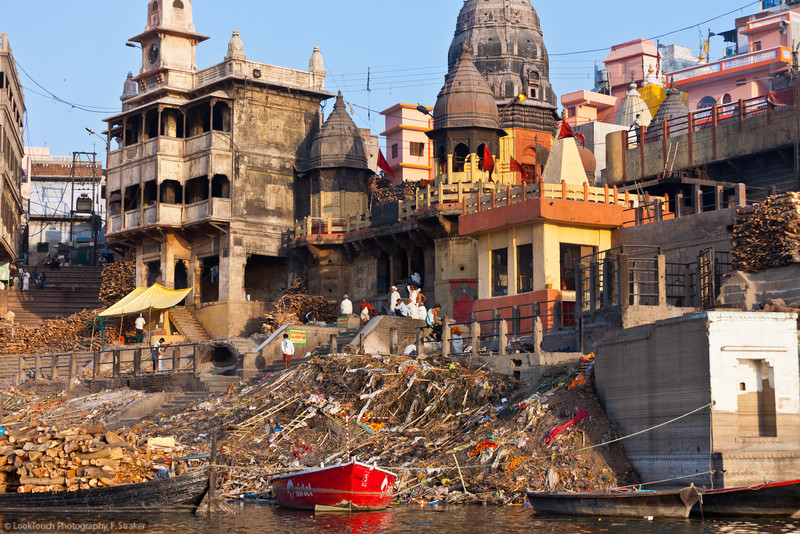 Burning ground at Manikarnika Ghat. The most prestigous spot for cremation. Afterwards the ashes are thrown in the Ganga river.</br>Unfit for cremation are dead infants, pregnant women, victims of snake bite, small pox, lepers, suicides, and holy men. Those bodies are bound to a piece of rock, taken on a boat out at the Ganga and dropped in the river. A special kind of snapping turtles is bred and kept in the river to eat the bodies before they surface again.

One of a couple of stories about how this place was started: Lord Shiva along with Parvati came to Kashi before Vishnu to grant him his wish. Vishnu dug a kund(well) on the bank of Ganaga for the bath of the couple. When Lord Shiva was bathing a Mani(Jewel) from his earing fell into the kund, hence the name Manikarnika(Mani:Beads Karnam:Ear Angad: Ornament). (source Wikipedia)